Restarting and shutting down your Mac

There are various ways to restart and shut down your mac. The obvious one is through the Apple menu (there's very little magic about that), but the one that is more useful is using a command line. Because MacOS is a derivative of Unix, it has many tools hidden from an average user. To restart the system using a command line, open a terminal and run the following:

You will be prompted to enter your password (the same one you use to install apps). You can also shut it down by running this command:

Why is this useful? Sometimes the system hangs or you are at a distance and would like to restart your system. This command can run inside an SSH window, so there's no need to access the GUI itself. It can also be scripted and automated to run nightly, for example. 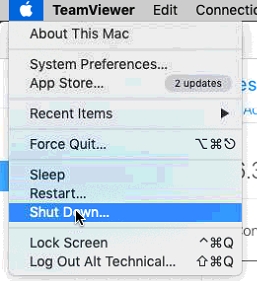 ALT is an IT consulting and IT services company, specializing Windows, Linux and Mac support. Contact us for any IT related issues!

We offer a wide range of services for Apple computers and peripherals: from personal devices to full sever deployment.